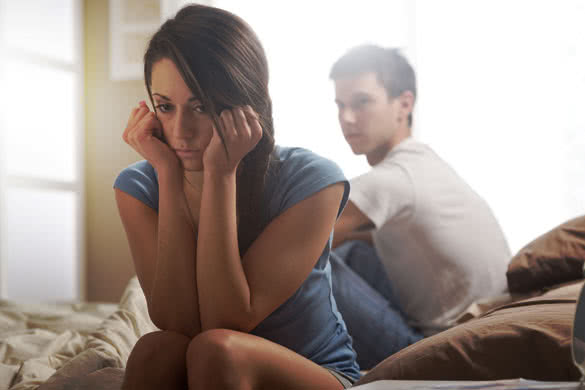 People naturally want to control their environment. People are notoriously unable to let things go and let situations just be. We feel like we must take action to make things go our way. So, it shouldn’t be a surprise to discover your man shows signs of wanting control. It’s just natural.

But there’s a significant difference between just being human and desiring so much control that physical and emotional abuse results. People who want some control over their environments and themselves are normal. But somebody who wants constant control over what other people do and say has serious issues. Normal behavior doesn’t restrict other people’s freedom. Manipulative behavior does.

Here are five common signs that your significant other is too controlling:

People’s need for control is rooted in deep insecurities. They may be insecure about more than your relationship, though that’s certainly part of it. Insecure people’s neuroses are rarely limited to just one aspect of their lives.

Insecurity has many levels. Minor insecurities about certain aspects of life are normal. If your boyfriend feels insecure about his job or his performance in bed, assure him that he’s fine just as he is.

But if his insecurity morphs into paranoia, communicate your concern. Paranoia causes trust issues in relationships, which can lead to false accusations, spying, and irrational fear of infidelity. This is not healthy behavior.

Women commonly succumb to the misconception that the right way to handle a man’s insecurities is to appease him or to lavish affection on him. But don’t let him invade your privacy or snoop. Don’t let him lead you to doubt yourself. It’s possible to love him while helping him overcome insecurities and supporting him. Masking the problem and not tackling it directly won’t solve the issue.

The criticisms may be small and occasional at first. But if he’s constantly criticizing you, he’s exhibiting controlling behavior that should cause concern.

Controlling people use criticism to influence others’ behavior. By making others feel incompetent, stupid, and small, they become helpless, and they’re far easier to control that way. If you feel like your boyfriend is taking your power away a little bit at a time, then he’s probably trying to control you.

But don’t rationalize the situation. It can be rewarding and even noble to accept criticism. But it’s self-destructive to accept pointless criticism. You’re certainly not doing everything wrong.

He’s not criticizing you to help you become a better person. If he truly cared for and supported you, he’d offer constructive input to help you improve, along with encouraging feedback. Pointing out things he doesn’t like about you isn’t constructive. It’s bullying.

You don’t have to change for him. If he things that you do everything wrong, you won’t feel accepted and loved. If he thinks everything you do is wrong, then you clearly aren’t meant to be together.

If you question how he hates everything you do but still stays with you, he needs to explain his thought process to you. Tell him you feel like you can’t possibly meet all of his expectations, and you can’t change every detail about yourself. If he doesn’t accept you, the best thing for you to do is to walk away before his manipulative behavior escalates into physical and emotional abuse.

Manipulation won’t end with verbal criticism. Does he threaten and openly attempt to control you? Is everything in your relationship transactional or conditional?

It’s normal to have expectations in a relationship, like respect, faithfulness, and so on. It’s not normal to manipulate your partner into yielding those things. Your boyfriend needs to talk things through with you. Trying to control your behavior with threats is toxic. Real love doesn’t involve requirements and conditions.

Ultimatums and threats are extreme methods of controlling behavior. You may think it’s possible to change your boyfriend by compromising, agreeing with him, or talking things through. But responding to his threats with anything short of “no” will only establish you as weak, which he will certainly use to his own advantage.

If he truly loved you, he’d do anything he could to make sure you’re happy. A loving partner wouldn’t threaten to withhold kindness or to break up with you in an effort to get his own way. This is selfishness.

Don’t stay in a relationship that’s based on threats. If the only reason he stays with you is that he knows you’ll give in to his threats, then he’s abusing you and you need help. You deserve better than that.

A guy who isolates you from other people is asserting his dominance. Isolated people are easier to control. Signs he may be trying to isolate you is that he actively instigates drama, he drives wedges into relationships you and the people that you care for, or straight-up forbids you to see them. Nobody has a right to prevent you from seeing your loved ones—even if he doesn’t get along with them.

If your boyfriend forbids your relationship with friends or family, he’s taking away what you value most. Is being with him worth losing everybody else in your life?

Returning to insecurity: it’s common for controlling people to distrust their partners. They may even spy on them or follow them around to be sure they’re staying “in line.”

If your boyfriend stalks you or reads your text messages, you need immediate help. You should speak to a trusted family member or friend. If you feel you’re in danger, you should get law enforcement involved.

Bottom Line: Is He Controlling?

If your relationship includes any of these signs, you need to have a serious conversation with your significant other. Unfortunately, controlling people are notoriously poor listeners, and are good at blaming others. If this is your experience, it’s probably best for you to end the relationship.

Somebody who doesn’t have enough self-awareness to recognize their own shortcomings will only give you grief. A boyfriend who doesn’t appreciate you isn’t worth keeping. Leave him—and explain why.