Sometimes men don’t know why they do the things that they do. This is especially true when it comes to sex. There’s this portion of the brain known as the “reptilian brain.” Essentially, it seeks sex and pleasure without no regard for the consequences.

Sometimes the reptilian brain is what guides men in their interactions with women. But women generally act from their hearts. Men and women simply process things differently.

But that doesn’t justify men’s loss of interest in women after they have sex.

So stop wracking your brain trying to figure out what it is you did to make the guy pull away from you after your roll in the sack. Seriously, it’s not you, it’s him.

All you can do is try to understand the reasons men back off after sex, and formulate the best possible response.

At certain times in their lives, all guys want is sex, and they’ll do anything to get it. These guys give in to their reptilian brains and do whatever it takes. Once they’ve gotten the sex, they’re done. Some men seek sex to boost their sense of self esteem. Other guys use sex to feel a sense of control.

If all you have in your relationship with a guy is sex, what can you do about it?

Be aware of the signs that he’s that way before you jump into bed with him.

If he makes no effort to make plans with you, take note. If his jokes are perverted and make you feel uncomfortable with, realize why his fallback sense of humor is nothing but sexual innuendo.

If everything seems to point to the fact that he’s not interested in you unless you have your clothes off, it’s time to move on. It’s not likely that you’ll change his mind after you’ve slept together. And if you’re looking for your Mr. Right, you’ll only feel regret for going as far with him as you did. 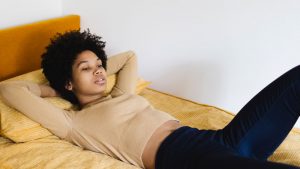 Maybe the guy you’re with really intended to become your boyfriend. He may have even thought he was falling in love with you. Then you slept together.

Now he’s flipping out on the inside because he’s realizing you have nothing in common, that you barely know each other.

Men can often feel like they know people better than they do, because of lust. It’s easy to get caught up physical chemistry. The sparks leading up to your first time together can be astonishing.

But then the dust clears, you realize you don’t know each other that well after all, and having sex already ruined the possibility of growing closer emotionally

The best advice to follow is to take things slowly from the very beginning. Taking the time to get to know each other will only enhance your intimacy and make things that much sweeter when you consummate your relationship.

Maybe he just wasn’t into it, or you like different things and weren’t comfortable talking about it. Maybe he finished really quick, but you wanted more. Those things happen all the time. They’re perfectly normal.

Judging sexual compatibility after just the first time together can be difficult. Either or both of you may be nervous, and you don’t know how to talk together about what turns you on. It can take a while to get used your partner’s body, needs, and wants, so if you’re both interested, maybe you need to give things another chance.

If he’s uninterested in trying again, try to open the dialogue with him to increase his curiosity about how much better things could be the next time. Men like women who express sexual confidence and take initiative. Frame the conversation and suggestions in a positive way. Don’t be critical or negative.

It’s usually worth it to try again. But sexual compatibility isn’t universal. Be forewarned that a relationship together likely won’t make things easier in bed. If you both agree there was no chemistry and you don’t think things can change, it’s probably time to end it.

It’s common for a woman to feel more connected with a guy after they sleep together. But men, especially  when they think there’s only something casual going on between the two of you, may freak out a bit if he sees you making googly eyes at him after sex.

He may be sensing you want a higher level of commitment. If he doesn’t and begins to retreat, you’ll notice pretty quickly.

If the truth is that you’re really not getting attached to him emotionally, make that clear to him. If you like things the casual way they are, tell him. But if you’re ready to commit, begin making that clear.

It’s better to be honest than for both of you to waste time and energy on the relationship.

Often when two people have sex together for the first time, it serves as a moment of clarity for their relationship. It’s common for men to back off after having sex, because they realize the relationship just isn’t what they wanted.

But don’t let the guy be the only one to make the decision if the relationship has the potential to succeed. Take a look at the way things are between you when you’re not in bed together:

If you can’t answer “yes” to those questions, you might be trying in vain to force a connection. Even if the sex is great, it’s not enough to sustain a relationship.

Happy and healthy relationships include great sex and other forms of quality time. Don’t let sex be the only thing involved in the relationship. It should be a component that balances out with other factors.